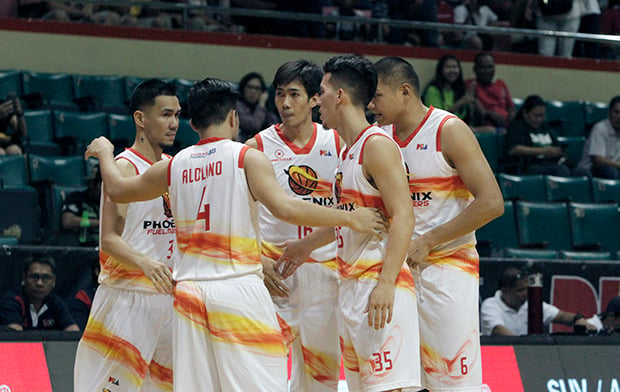 Barangay Ginebra and Phoenix Petroleum clash Sunday night in one of the key matches in the homestretch of the PBA Philippine Cup elimination round, each one fighting to stay in the race for a twice-to-beat advantage in the quarterfinals.

Both in a heavy pack behind runaway leader San Miguel Beer, the Gin Kings and the Fuel Masters face off at 6:45 p.m. at the Philsports Arena in Pasig where the winner claims an outright playoff spot.

Ginebra and Phoenix have wheeled back into contention for a Top Two finish on their stirring triumphs the last time out.

The Kings have actually won their last two games – their first successive triumphs in the season or since winning the Governors Cup over the Meralco Bolts.

Ginebra dumped Meralco, 83-72, in a road game in Iloilo City on Jan. 14 then rapped Blackwater, 99-90, Friday night despite the early exit of Japeth Aguilar with a muscle strain sustained on an awkward fall after a jam.

Phoenix, meanwhile, once again bounced back from a loss, trouncing NLEX, 102-91, on Wednesday.

Ginebra coach Tim Cone said Aguilar will be a game-time decision against Phoenix.

“We’re certainly not ruling out Japeth, but he is doubtful to play. We will continue to treat and rehab him through the day and night,” said Cone.

With great resolve, the Kings hurdled the Elite the last time even with Aguilar confined on the bench in the entire second half.

Jervy Cruz and Dave Marcelo ably filled in for Aguilar, with the reserved Ginebra frontliners combining for 29 points.

Then there were LA Tenorio, Joe Devance and Scottie Thompson who all churned out sterling all-around numbers.

Ginebra’s concern is a short preparation against a Phoenix side that ran on a high-octane gas in the second half on the way to an 11-point win over NLEX the last time out.

The Kings and the Fuel Masters will likely be both determined teams in their crucial setto Sunday night.