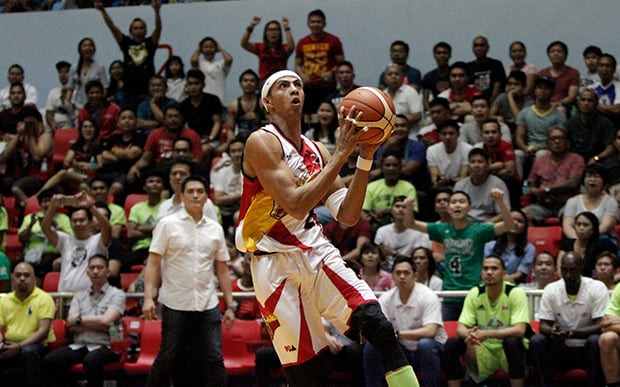 LAPU LAPU CITY — June Mar Fajardo made a worthy homecoming in his home province, teaming up with Arwind Santos and Marcio Lassiter to power San Miguel Beer past GlobalPort and into an outright top finish in the 2017 PBA Philippine Cup elims here Saturday night.

Before an impressive crowd at the Hoops Dome here, Fajardo, Santos and Lassiter all came through with productive numbers as the Beermen repelled the Batang Pier, 106-100, to claim top seeding in the post-elims play.

Minus a fever-hit Alex Cabagnot, the Beermen rode heavily on Fajardo, Santos and Lassiter as they pulled away further from the field with an eighth straight victory and ninth in 10 games in all.

Win or lose in their last game against TNT KaTropa, the Beermen will finish No. 1 in the elims, enjoying a twice-to-beat advantage over the eighth-ranked team in the quarterfinal round.

Falling short in their own bid in this Petron Blaze Saturday Special, the Batang Pier dropped to joint second place with the Barangay Ginebra Kings, the Phoenix Fuel Masters, the Texters, and the Rain or Shine Elasto Painters at 5-4.

And thus the fight for No. 2 spot remains wide open.

Fajardo, Santos and Lassiter combined for 72 points as the Beermen matched their eight-game streak during their title run in the 2015 Governors Cup.

The 2013 MVP took charge in the final quarter with the GlobalPort defense all over Fajardo, a proud son of the Cebu province from Pinamungajan town.

Lassiter also helped open up the lane for Fajardo as the Fil-Am gunner fired four three-pointers plus three twinners and four charities.

Held to seven points and five rebounds in the first half, Fajardo wound up with a double-double game with 12 markers and 10 boards in the last two quarters.

Read Next
Garcia: Rain or Shine played ‘terrible’ in loss to Meralco
EDITORS' PICK
Sex on the menu for Pogo workers
First female commodore named
Foreigners prepare to flee as China virus toll tops 100
We Can’t Guarantee You’ll Win a P20 Billion Jackpot, But We Can Help You Try
SM continues to send relief assistance to remote towns in Batangas
Best Gift Ideas in the Philippines
MOST READ
Sex on the menu for Pogo workers
‘Normal people doing normal work’ need not wear mask – WHO official
Kobe Bryant gear pulled out of Nike online store in wake of his death
Lacson on VFA impact study: ‘Better late than never’
Don't miss out on the latest news and information.