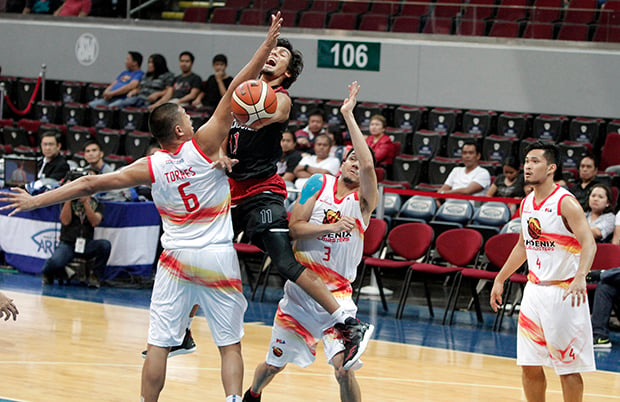 Finishing with the second-worst record may be a disappointment, but not for a team like Mahindra, which still managed to win three games despite losing its core players from last season.

Despite the Floodbuster’s surprise run in the 2016 Governors’ Cup, coach Chris Gavina found himself back to square one as he had to start from scratch after the team opted to let go of Nino Canaleta, Aldrech Ramos, Bradwyn Guinto, Keith Agovida, and Paolo Taha.

With a new-look team led by Alex Mallari, Mahindra unsurprisingly struggled, dropping its first five games before scoring a breakthrough on Christmas Day, a 97-93 overtime victory over Blackwater, and following it up with a 105-82 triumph over Meralco.

Though the Floodbuster ended the conference with a 3-8 slate, there were definitely some positives for the team going forward.

“There’s definitely the light at the end of the tunnel,” said Gavina. “I’ve been telling the guys that our losses don’t define the character that we built and the resiliency of our guys to stay together. A lot of young guys are learning to deal with adversity and figure out how to be successful at the elite level. Being young, you can’t fast-track experience, but a lot of guys made a lot of headways.”

For one, Mallari is looking like a legitimate go-to guy for Mahindra. Holdovers LA Revilla, Mark Yee, and Jason Ballesteros have also provided consistent contributions for the team. Its rookies Russel Escoto, Joseph Eriobu, and Reden Celda have also been solid, as well as free agent pickups Philip Paniamogan and Jeric Teng while veterans Ryan Arana and Gary David are expected to recover from their injuries in time for the second conference.

“Our guys are really looking forward to coming back and hold themselves accountable for their performance,” Gavina said.

“I truly believe that we’ll have a better showing,” he said. “We’re going to have extended time to really start teaching guys just how to play basketball, the way we need them to play – not the way they think they need to play – and develop the guys’ skill sets that I feel like we need to maximize them in our system. The way we develop is really uncanny. We break down players’ weaknesses and maximize them so we can turn those weaknesses into strengths.”

Mallari believes the Floodbuster will make a splash in the Commissioner’s Cup.

“We’re young and we got a lot of energy. We just need to put it all together. Every new team has a learning process and we know that. With an import, it’s going to take a lot of load out of the other guys and open up more opportunities for everybody. I think next conference, we’ll make some noise.”

But for that to happen, Gavina said that there should be continuity with the roster that he has.

“I’m praying I won’t be losing eight guys again coming in the second conference and start from zero. If we can keep this core together, I think I’m expecting us where we want us to be,” he said, as the Mahindra management now begins to scour the globe for a reinforcement next conference.

“Hopefully, we can get a monster of an import. I hope Kobe Bryant is available. Maybe he’s on our budget,” Gavina joked, ending the all-Filipino conference with a smile on his face.