Compton expects Alaska to be in ‘real battle’ vs Ginebra 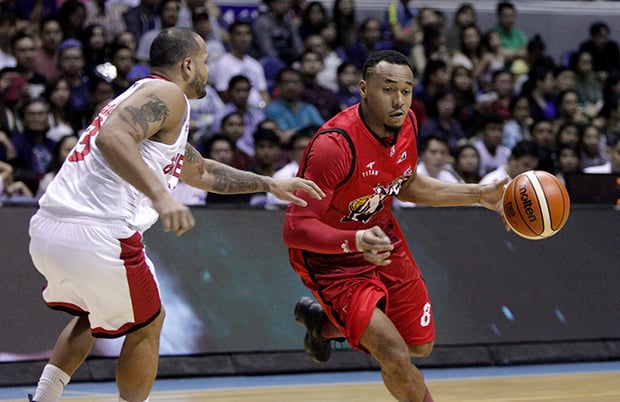 Both sides foresee a tough battle but are also excited to take on the challenge.

The Alaska Aces and the Barangay Ginebra Kings collide in what’s easily the most exciting matchup in the PBA Philippine Cup quarterfinals – a duel pitting the 2016 Philippine Cup and Commissioner’s Cup runners-up and the 2016 Governors Cup titlists.

It’s the duel between the second seed and the seventh seed, but not a few won’t buy Ginebra’s ranking.

“Ginebra is an extremely tough opponent. We are only separated by one game in the standings. They have a great system, a winning coach and multiple Gilas players along with champion veterans. We have got to be fundamentally sound and I expect a real battle,” said Compton.

Of course, the Aces have a crucial edge on their side with the twice-to-beat incentive earned on their second-place finish behind San Miguel Beer in the elimination round.

They take their first of two cracks at the Final Four versus Ginebra in their 6:45 p.m. tussle at Ynares Sports Center in Antipolo Sunday.

“Our road through the playoffs is a tough one, but our guys are excited to take on the challenge,” said Ginebra coach Tim Cone.

Relegated into seventh place with the poorest quotient in a four-way tie with TNT KaTropa, GlobalPort and Phoenix Fuel at 6-5, the Kings nonetheless made the best preparation they could, firstly, in a bid to force a sudden death.

“We prepared as well as we could, but Alaska is a tough team to prepare for, so we’ll see where our preparation takes us,” said Cone.

Crucial is the readiness of Japeth Aguilar.

The Gin Kings had been jockeying for position in the middle of the chart when Aguilar suffered a strained muscle and Ginebra dropped a key game against Phoenix, 73-79.

In their last game against NLEX, Aguilar was still hardly a factor in their 90-80 win.

The Kings would surely need to have Aguilar in his best shape as they take on Alaska with its energy guys including Calvin Abueva and Vic Manuel.

The Aces won their last two games against the Mahindra Floodbuster and the Phoenix Fuel Masters both in runaway fashion to claim the playoffs second seed. They actually lost only once in their last five outings, making them among the hottest teams going into the playoff play.

Read Next
Austria wary of dangerous Rain or Shine
EDITORS' PICK
Sex on the menu for Pogo workers
First female commodore named
Foreigners prepare to flee as China virus toll tops 100
We Can’t Guarantee You’ll Win a P20 Billion Jackpot, But We Can Help You Try
SM continues to send relief assistance to remote towns in Batangas
Best Gift Ideas in the Philippines
MOST READ
Sex on the menu for Pogo workers
‘Normal people doing normal work’ need not wear mask – WHO official
Kobe Bryant gear pulled out of Nike online store in wake of his death
Lacson on VFA impact study: ‘Better late than never’
Don't miss out on the latest news and information.