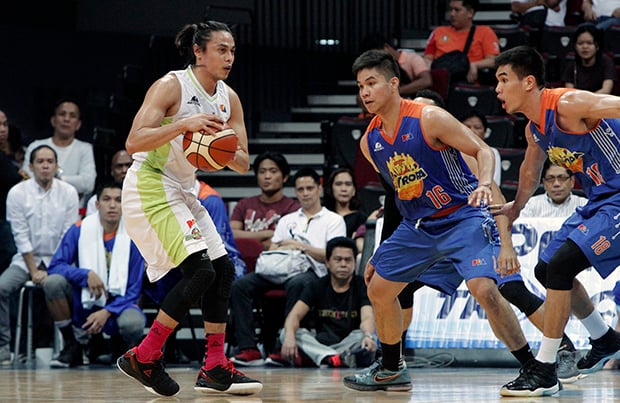 The TNT KaTropa have yet to find ways to stop the dynamic duo of Terrence Romeo and Stanley Pringle. But they’ve been finding ways to hurdle the whole GlobalPort team.

The KaTropa look to make it 3-0 over the Batang Pier in the conference, going for the kill in their PBA Philippine Cup best-of-three quarterfinals showdown at Smart Araneta Coliseum Monday night.

On Saturday over at the MOA Arena in Pasay, the Texters came through with a solid effort together, negating Romeo and Pringle’s explosive combined output of 47 points in a 109-101 win in the opener of their race-to-two-games series.

The KaTropa hope to be able to carry over that effort on Monday as they try to close out the series and avoid a deciding game that anything can happen.

“They’re always a dangerous opponent, much more in a sudden death. So we’d rather finish it in Game Two. We’ll try out very best to do that,” said TNT chief guard Jayson Castro.

Ranidel de Ocampo said they still have a job cut out for them, expecting the Batang Pier to wage a big fightback.

The Batang Pier actually got off to a fiery start Saturday but were effectively slowed down by the Texters in the last three quarters.

TNT made a huge turnaround from a 12-point first-quarter deficit, having its own huge double-digit bulges before sealing the win that got the Texters to within a win of a Final Four matchup with the winner of the San Miguel Beer-Rain or Shine showdown.

But Romeo and his teammates aren’t expected to just roll over and die.

They intend to give everything they’ve got in a hope to stay in contention for a return stint in the all-Filipino semifinals.

They had their breakthrough semis stint in the Philippine Cup last year in pulling the rug from under Barangay Ginebra in the quarterfinals.

The team is looking forward to get the other GlobalPort players more involved in the game with Romeo and Pringle.

That’s been the key for the Texters as shown by their balanced scoring. In Game One, Castro, Moala Tautuaa, Larry Fonacier, Troy Rosario and Matt Ganuelas-Rosser all put in at least 10 points each, with Kris Rosales, Roger Pogoy, Ryan Reyes, Kelly Williams, De Ocampo and Harvey Carey having their significant help.