Lee on Star's recent success: 'We commit to each other'
Close
menu
search

Lee on Star’s recent success: ‘We commit to each other’ 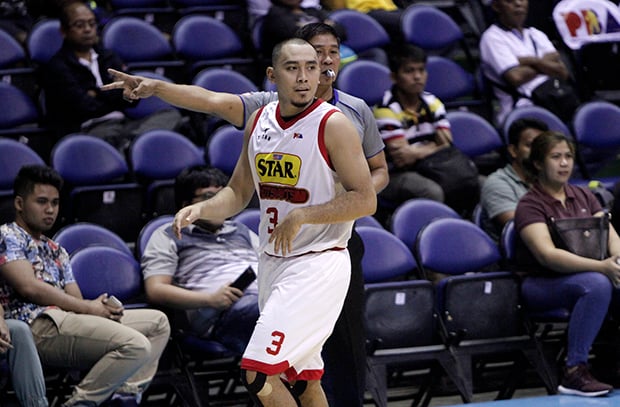 Looking like a well-oiled machine, Star has been on a roll late in the 2017 PBA Philippine Cup.

With everything clicking, the Hotshots racked six straight victories, their last being a 91-71 win over Phoenix to book a spot in the semifinals.

And for Paul Lee, the team’s chemistry has truly been evident in this stretch, with the holdovers, rookies, and newcomers finally blending in well after Star’s 0-2 start to the conference.

“We’re very happy because we commit to each other. Our goal from the start is to develop our chemistry and we’re finally doing it,” he said.

Waylaying their last six foes by an average winning margin of 27.8 points, the Hotshots have been one of the hottest teams late in the conference. And Lee has no one to credit for the streak but coach Chito Victolero, who placed the system that allowed the squad for the turnaround from last season’s campaign.

“We’re thankful that we committed on what coach Chito wanted to do,” he said. “When we are doing good defense, our offense also follows. We’re not intending to shoot at a high rate, but when we’re getting stops, everyone’s having fun,” he said.

As elated as Lee is with the way Star has been performing, he’s hopeful that this won’t be the team’s high point, noting that there are still some chinks that the team needs to fix for it to be better.

“There’s still things that we need to improve. Hopefully, we’re peaking at the right time, but I can see that we have a bright future. We’re performing well now and our chemistry has been nothing but great,” he said.

And it is that confidence that gives Lee and the Hotshots enough trust that they can top whoever they face in the semifinals.

“We need to be ready. We need to play Star Hotshots basketball,” he said. “We won’t do anything different but to trust each other, trust the system, and play hard.”

Read Next
Pingris attributes Hotshots’ rise to defense
EDITORS' PICK
Speed up your game with the new vivo Y20s [G]
Metro Manila to have shortened curfew hours from 8 p.m. to 5 a.m. under MECQ
Philippines, US to begin 2-week joint ‘Balikatan’ exercises on Monday
‘NCR Plus’ to be under MECQ starting April 12 until April 30 — Palace
Pre-order the new vivo Y20s [G] to get a free TWS earphone
Pru Life UK receives four golden arrows for solid corporate governance
MOST READ
Stop ‘creeping occupation’ of ‘militia’ boats in WPS, Pacquiao asks China
Bea Alonzo clarifies status of her relationship with Dominic Roque
Convicted former aide of Sen. Bong Revilla dies — BuCor
Locsin to China: ‘Then move out’
Don't miss out on the latest news and information.