Mercado on Ginebra comeback: 'We gave it all'
Close
menu
search

Mercado on Ginebra comeback: ‘We gave it all’ 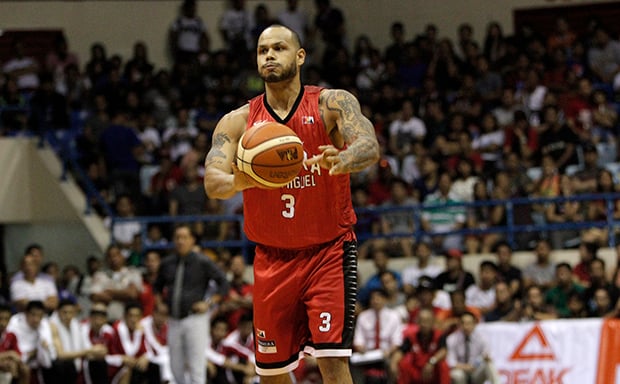 With its back against the wall, Ginebra knew it had no choice but to pull off a win against Alaska on Saturday.

But extending the Gin Kings season seemed like a tall task, especially after the Aces erected a 53-37 lead early in the third quarter.

“There was no tomorrow. If we lost, it will be a long break sitting at home so we didn’t want this to end,” shared Sol Mercado.

A basket here and a stop there, Ginebra clamped down on defense as it went on a 25-1 run to end the period to take a 62-54 lead.

“We gave it all, everything we had,” he said.

Ginebra would pull off the 85-81 victory over two-seed Alaska to force a decider in their 2017 PBA Philippine Cup quarterfinals series, and for Mercado, his team’s extended run this conference should only be attributed to one thing: defense.

“We were struggling to score in the first half, but our defense kept us in it. Luckily, we played horrible and we’re only down by 12 at the half. We knew that we picked it up offensively, relaxed a little, I think we wanted it too bad,” he said. “Coach told us to calm down and let the game come to us and continue to focus on getting stops.”

Mercado finished with 12 points, six assists, and two rebounds in the win. But in his mind, the game is already over and done with, focusing now on Game 2 slated on Tuesday.

Read Next
Lee on Star’s recent success: ‘We commit to each other’
EDITORS' PICK
‘NCR Plus’ to be under MECQ starting April 12 until April 30 — Palace
Speed up your game with the new vivo Y20s [G]
Pre-order the new vivo Y20s [G] to get a free TWS earphone
Metro Manila to have shortened curfew hours from 8 p.m. to 5 a.m. under MECQ
Malls adjust ‘NCR Plus’ operating hours for April 12-30 MECQ
Pru Life UK receives four golden arrows for solid corporate governance
MOST READ
Stop ‘creeping occupation’ of ‘militia’ boats in WPS, Pacquiao asks China
Bea Alonzo clarifies status of her relationship with Dominic Roque
Convicted former aide of Sen. Bong Revilla dies — BuCor
Locsin to China: ‘Then move out’
Don't miss out on the latest news and information.