Compton, Aces look to avoid breakdowns in another ‘tough’ duel vs Gins 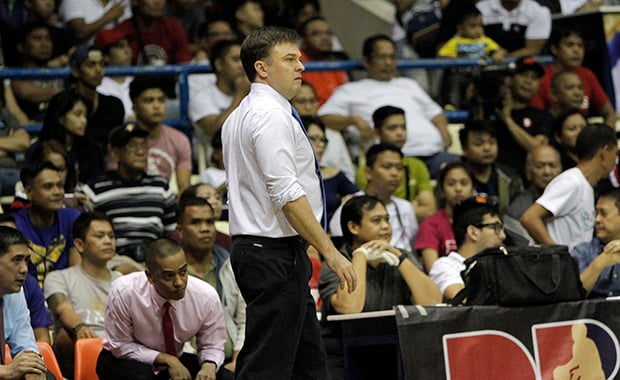 After suffering a 17-point meltdown on Sunday, Alaska is hoping to pick up the pieces when it fights Ginebra anew on Tuesday.

Aces head coach Alex Compton said that rather than being down following a 85-81 loss to the Gin Kings, the Aces must learn their lessons from the collapse as they eye a spot in the 2017 PBA Philippine Cup semifinals.

Holding a 50-33 advantage, Alaska all of a sudden lost grip of the lead and succumbed to the pressure of the Gin Kings. Ginebra would the unleash a furious 25-1 rally to take the 62-54 advantage at the end of the period.

Compton doesn’t think his wards relaxed one bit, but rather, praised the defensive scheme coach Tim Cone employed in that third frame.

“I think they pressured us a little bit, they got some stops, and got off and running. I didn’t feel like anybody thought it was over. We turned it over, we fought back, but we went from up double digits to down eight,” he said.

But the game is over now, and Compton’s eyes are firmly wrested on Tuesday’s tiff, with him giving his full trust in his crew as Alaska plays Ginebra once more with a spot in the semifinals hanging in the balance.

“We’re tough and resilient. We don’t stop. We went through a really bad spell, but we kept on fighting. We had to bring some energy and play our hardest. Hopefully, we’ll have a better result,” he said.

“They won with their backs against the wall. Now both of our backs are against the wall. While I’d say I hope it’s an exciting game, I hope we win comfortably. But that’s not my prediction. I think it’s going to be a tough, hard fought game.”

Read Next
Mercado on Ginebra comeback: ‘We gave it all’
EDITORS' PICK
‘NCR Plus’ to be under MECQ starting April 12 until April 30 — Palace
Speed up your game with the new vivo Y20s [G]
Pre-order the new vivo Y20s [G] to get a free TWS earphone
Metro Manila to have shortened curfew hours from 8 p.m. to 5 a.m. under MECQ
Malls adjust ‘NCR Plus’ operating hours for April 12-30 MECQ
Pru Life UK receives four golden arrows for solid corporate governance
MOST READ
Stop ‘creeping occupation’ of ‘militia’ boats in WPS, Pacquiao asks China
Bea Alonzo clarifies status of her relationship with Dominic Roque
Convicted former aide of Sen. Bong Revilla dies — BuCor
Locsin to China: ‘Then move out’
Don't miss out on the latest news and information.