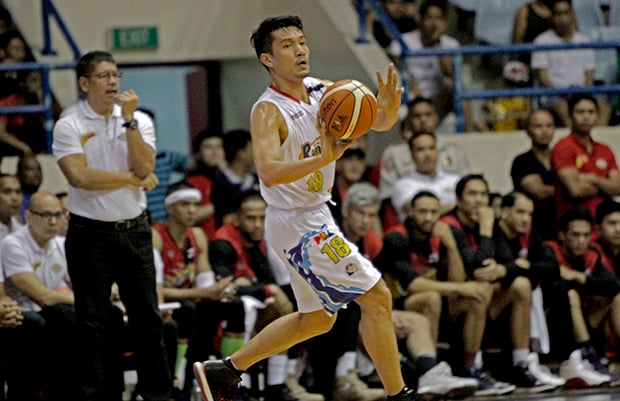 Disappointing as Rain or Shine’s campaign in the 2017 PBA Philippine Cup may have been, James Yap is hopeful that the team has learned its lessons going forward.

“Actually, we played well but we just fell short. Here is when we’ll be stronger, when you’re in this situation that you’re out of the conference. Here is where we’ll build trust in each other. So I hope the good things we had, we’ll take it to the next conference,” Yap said.

Yap ended his first conference with the Elasto Painters on Sunday with a 98-91 loss to San Miguel.

But rather than be down, Yap is looking at this shortcoming as a turning point for him and the squad as Rain or Shine hopes to shrug off the cobwebs and bounce back stronger in the import-laden conferences.

“This will be the start. That’s how basketball is. Sometimes, it’s still not your time.”

The two-time PBA Most Valuable Player also shared that he believes that slowly, he’s getting into the Elasto Painters’ groove, saying, “Until now, there’s still an adjustment.”

Yap averaged 10.7 points, 2.9 rebounds, and 1.4 assists in his first conference with Rain or Shine, but don’t be fooled, as he eyes to further blend in with the team’s core after the team’s short offseason break.

“There were times that I still get lost. It’s not going to be one click, and I’m already ok. But I’m getting there, so hopefully next conference, I can finally get it.”

Read Next
TNT holds off GlobalPort, arranges semis clash with SMB
EDITORS' PICK
Speed up your game with the new vivo Y20s [G]
Metro Manila to have shortened curfew hours from 8 p.m. to 5 a.m. under MECQ
Philippines, US to begin 2-week joint ‘Balikatan’ exercises on Monday
‘NCR Plus’ to be under MECQ starting April 12 until April 30 — Palace
Pre-order the new vivo Y20s [G] to get a free TWS earphone
Pru Life UK receives four golden arrows for solid corporate governance
MOST READ
Stop ‘creeping occupation’ of ‘militia’ boats in WPS, Pacquiao asks China
Bea Alonzo clarifies status of her relationship with Dominic Roque
Convicted former aide of Sen. Bong Revilla dies — BuCor
Locsin to China: ‘Then move out’
Don't miss out on the latest news and information.