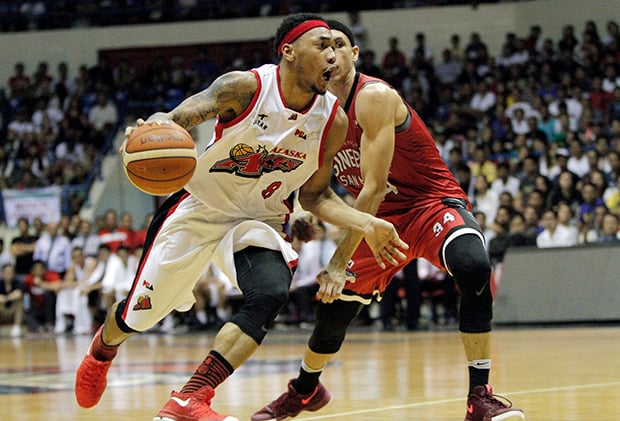 Barangay Ginebra and Alaska Milk slug it out for one last time at Smart Araneta Coliseum Tuesday night, both determined to step up their game even more to have a chance at winning what could well be a slam-bang KO setto.

The two teams are expected to go hammer and tongs at each other in their 7 p.m. do-or-die showdown for a spot in the PBA Philippine Cup Final Four versus the winner of the Star-Phoenix Petroleum matchup.

Forget now which team is the higher seed. Forget which had had a better slate in the elims. Forget the stats. Throw everything out of the window.

This is a sudden death, a rubber match, a no-tomorrow game. It’s about heart, desire and fortitude.

Both have been in this situation many times in the past. Each side knows what it takes to win this game.

Pressure, however, could be heavier on Alaska’s side while facing a possible ignominious exit.

Needing one win to claim a semis entry, the Aces had looked on the way to getting there Sunday night only to stumble in the face of a searing Ginebra rally.

The Kings went on to complete a stirring come-from-behind 85-81 win to force the knockout match.

“It takes a special effort to win a twice-to-beat and we’re certainly hoping we’re that team that can do it,” said Ginebra coach Tim Cone.

“Hopefully, we gathered a little confidence from the last game and we can use it moving forward. We know Alaska is going to be ready,” Cone also said.

Alaska coach Alex Compton is hoping his troops to be at their best.

He rued their third-quarter slump the last time out.

“Ginebra played tough in Game One and gutted out the win. We battled but really shot ourselves in the foot during the third period,” he said.

The Gin Kings banked on a huge third-quarter turnaround that saw them erase a 17-point lead, before weathering a late stand by the Aces to pull off the hard-earned win before a sellout crowd of 10,041 fans at the Ynares Center.

A mammoth crowd is also expected at the Big Dome for this expected dogfight of a do-or-die match.

Read Next
Yap admits he’s still adjusting as ROS looks ahead to next conference
EDITORS' PICK
Speed up your game with the new vivo Y20s [G]
Pre-order the new vivo Y20s [G] to get a free TWS earphone
6 p.m. to 5 a.m curfew stays as ‘NCR Plus’ bubble shifts to MECQ
Golf-playing, motorbike-riding Duterte chills before public address on Monday
Pru Life UK receives four golden arrows for solid corporate governance
‘NCR Plus’ to be under MECQ starting April 12 until April 30 — Palace
MOST READ
Stop ‘creeping occupation’ of ‘militia’ boats in WPS, Pacquiao asks China
Bea Alonzo clarifies status of her relationship with Dominic Roque
Convicted former aide of Sen. Bong Revilla dies — BuCor
Locsin to China: ‘Then move out’
Don't miss out on the latest news and information.