Pogoy showing worth with TNT in big stage 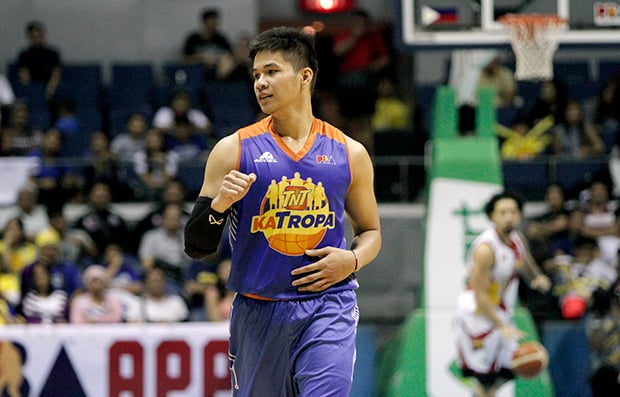 Roger Pogoy and Nash Racela have been in numerous wars before that it shouldn’t come as a surprise that the rookie has been starting for TNT in the 2017 PBA Philippine Cup semifinals series against San Miguel.

And on Sunday, the sniper out of Far Eastern University showed what he’s capable of, lighting it up from downtown with six 3-pointers to finish with 22 points in the KaTropa’s 98-92 Game 3 win for a 2-1 series lead.

Pogoy said it’s just a matter of seizing the opportunity with the Beermen’s defense focused on stopping Jayson Castro.

“They always collapse on Jayson whenever he slashes, so when he passes the ball to me, I’m always open. I’m lucky that my shots are also going in,” Pogoy, who also collected seven rebounds and three assists, said in Filipino.

Pogoy’s familiarity with Racela’s system has also been valuable in his adjustment in the pros. He is averaging 13.0 points on 40 percent shooting from threes, and 6.3 rebounds so far in this series. And that partnership has been nothing short of beneficial in giving the young gun enough confidence to step up at this stage.

“I’ve been with coach Nash for so long that I gain confidence from him,” he said.

But what Racela wants to see more from his ward is his defensive toughness against some of the league’s best players. Fortunately for Pogoy, he has taken those challenges to heart as he has passed those tests with flying colors.

“Coach is giving me the minutes to play and challenges me to guard against (Alex) Cabagnot and last time, Terrence Romeo. I gain confidence from that, as well as the veterans telling me not to be scared,” he said.

Pogoy also tries his best not to be overwhelmed with the situation, but he knows that for TNT to return to the Finals, everyone, must stay relentless on the defensive end.

“We have to think defense first. I feel so blessed with my position right now, two wins away from the Finals, but for us to get those wins, we have to continue improving on defense,” he said.

The KaTropa are halfway to the Finals with Game 4 slated on Tuesday at Mall of Asia Arena.

Read Next
Cone hints at Devance return as Ginebra tries to avoid 0-3 hole vs Star
EDITORS' PICK
‘NCR Plus’ to be under MECQ starting April 12 until April 30 — Palace
Speed up your game with the new vivo Y20s [G]
Pre-order the new vivo Y20s [G] to get a free TWS earphone
Metro Manila to have shortened curfew hours from 8 p.m. to 5 a.m. under MECQ
Malls adjust ‘NCR Plus’ operating hours for April 12-30 MECQ
Pru Life UK receives four golden arrows for solid corporate governance
MOST READ
Stop ‘creeping occupation’ of ‘militia’ boats in WPS, Pacquiao asks China
Bea Alonzo clarifies status of her relationship with Dominic Roque
Convicted former aide of Sen. Bong Revilla dies — BuCor
Locsin to China: ‘Then move out’
Don't miss out on the latest news and information.