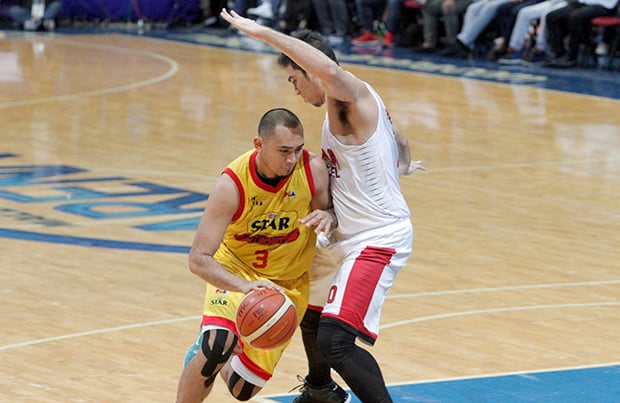 Star guard Paul Lee has been super the first two games of the semifinals series but in Game 3, he found his kryptonite in Barangay Ginebra’s defense.

Lee is averaging 17.5 points in the semis but on Monday night, he was held to just seven points on 3-of-13 shooting from the field.
“It’s not our day, it’s not my day and credit to Ginebra’s defense,” Lee told reporters.
“It’s not just one guy who tried to stop me. The whole team really made it hard for me. They gave me different looks so I need to adjust to that next game,” Lee, who turns 28 on Tuesday, said.
ADVERTISEMENT
The 6-foot Lee has been clutch throughout the series but he just couldn’t get it going this time for the Hotshots, whose eight-game winning streak was snapped following a 73-62 loss to the Gin Kings.
Lee added Star shot itself in the foot with the way it started the game. The Hotshots fell behind by as much as 13, 17-4, early and though they were able to recover and even take a 60-59 edge with 5:56 left, the damage had already been done.
“We started slow and we played their kind of tempo which was slow,” he said.
The Hotshots hope to bounce back on Wednesday in Game 4.
FEATURED STORIES
Read Next
Gin Kings avoid 0-3 hole, down Hotshots
EDITORS' PICK
‘NCR Plus’ to be under MECQ starting April 12 until April 30 — Palace
Speed up your game with the new vivo Y20s [G]
Pre-order the new vivo Y20s [G] to get a free TWS earphone
Metro Manila to have shortened curfew hours from 8 p.m. to 5 a.m. under MECQ
Malls adjust ‘NCR Plus’ operating hours for April 12-30 MECQ
Pru Life UK receives four golden arrows for solid corporate governance
MOST READ
Stop ‘creeping occupation’ of ‘militia’ boats in WPS, Pacquiao asks China
Bea Alonzo clarifies status of her relationship with Dominic Roque
Convicted former aide of Sen. Bong Revilla dies — BuCor
Locsin to China: ‘Then move out’
Don't miss out on the latest news and information.