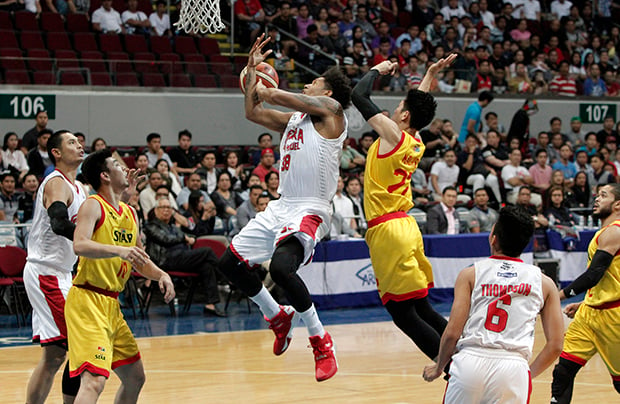 Star guards Paul Lee and Mark Barroca agreed Joe Devance caught the Hotshots off guard in a 91-67 loss in Game 6 on Sunday.

“Joe stepped up. We weren’t ready for that,” said Lee, who finished the game with eight points and three rebounds.

“We were surprised by Joe. He gave them quality minutes,” said Barroca, who had 13 markers and four assists in the defeat. “His two three-points really hurt us. We thought we’re going on a run in the third quarter, but it was Joe who had a good game.”

Playing through pain, Devance drilled a pair of treys that ignited the blazing Ginebra run in the third quarter, unfurling all of his 14 points and three rebounds in the pivotal period.

His defense also kept Star bigs off the boards as Ginebra went on a 10-2 tear to end the quarter, 62-54.

That spelled doom for the Hotshots as they were forced into winner-take-all Game 7 on Tuesday in their 2017 PBA Philippine Cup semifinals series.

“We were really surprised. He wasn’t playing for the longest time and he really shocked us. It was huge for them,” said Barroca, as Devance fought through his right plantar fasciitis injury to deliver for this game.

Charging this loss to experience, Barroca said Star must better prepare itself for the do-or-die tiff.

“In those situations, we shouldn’t take them for granted, like Joe’s foot was hurting because we know that he’s a veteran and he can step up,” he said.

He also stressed the Hotshots have to go back to their old unselfish ways.

“We have to stay together. We’re enjoying ourselves, but it has to be as a team. We can’t put them down individually. When we play, we really have to be united 14 heroes in those situations,” he said.

Lee said Star must be more focused on the defensive end after allowing Ginebra to shoot 49 percent from the field.

“It’s really our defense,” he said. “We no longer need any motivation. We, players, know what we’re going to do. It’s win-or-go home for us.”

Read Next
Ginebra has advantage in Game 7 because of Cone, says Pingris
EDITORS' PICK
Speed up your game with the new vivo Y20s [G]
Metro Manila to have shortened curfew hours from 8 p.m. to 5 a.m. under MECQ
Philippines, US to begin 2-week joint ‘Balikatan’ exercises on Monday
‘NCR Plus’ to be under MECQ starting April 12 until April 30 — Palace
Pre-order the new vivo Y20s [G] to get a free TWS earphone
Pru Life UK receives four golden arrows for solid corporate governance
MOST READ
Stop ‘creeping occupation’ of ‘militia’ boats in WPS, Pacquiao asks China
Bea Alonzo clarifies status of her relationship with Dominic Roque
Convicted former aide of Sen. Bong Revilla dies — BuCor
Locsin to China: ‘Then move out’
Don't miss out on the latest news and information.