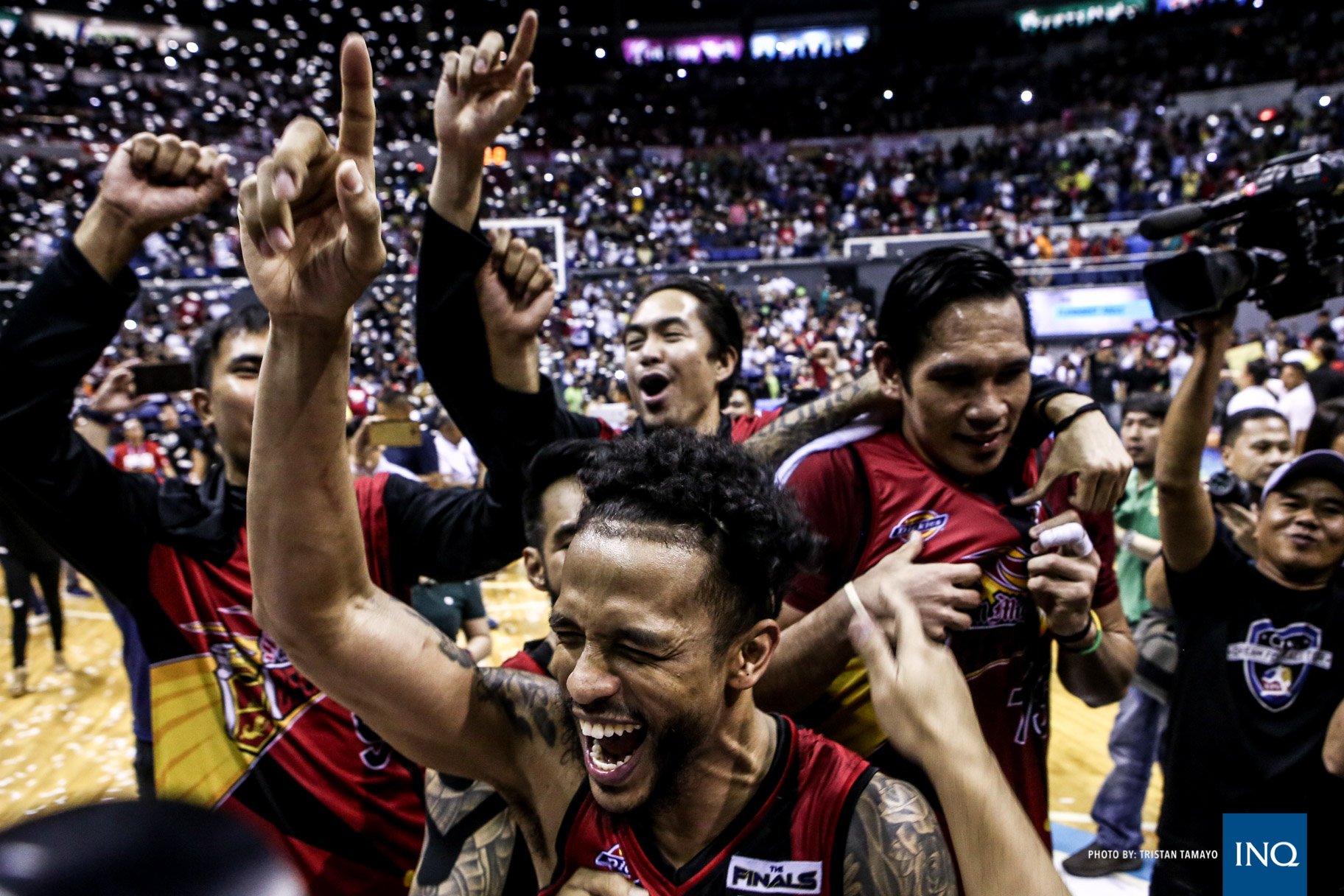 After delivering another noteworthy performance in the PBA Philippine Cup Finals, Chris Ross could’ve basked in the glory alone had he wanted to.

But the do-it-all guard would rather share the spotlight with his teammates.

“I was hoping they’d give out five [Finals] MVPs. Our starters did so much, we played so many minutes,  and I was just hoping all five of us could get a trophy,” he said on Sunday.

“It all starts from June Mar (Fajardo). We all benefit from his greatness. All the attention he gets? It all just trickles down. Arwind (Santos) and Marcio (Lassiter) space the floor for us, and Alex (Cabagnot) makes plays. It’s a total team effort. Everyone wanted was to win and end it tonight.”

Still, there’s no denying that Ross has been the heart and soul of this title conquest after averaging 12.7 points, 5.2 rebounds, 9.2 assists and 1.8 steals enough to merit him his second all-Filipino Finals MVP trophy.

And in the series-clinching Game 5, he showed how badly he wanted to complete the three-peat, posting 12 points, eight rebounds, 10 assists, and six steals, none bigger than his acrobatic layup to seal the deal in the final minute and anchor the Beermen to a 91-85 squeaker.

Ross bared he was truly hard on himself as he tried to make up for his miscues late after leaving LA Tenorio wide open twice, allowing the Ginebra playmaker to nail two huge treys that kept the Gin Kings in the game.

“I actually didn’t play too well defense in the fourth. I left my man a few times and LA hit a couple of threes. I was mad at myself,” he said.

Luckily for him, he had his teammates to lean on.

“My teammates had my back. We made enough stops at the end, we got the rebounds, and we were able to finish those guys off,” he said.

“There were times in the eliminations that I have an open layup and I’d pass it behind I don’t care about scoring because I want my teammates to be happy. That’s the main thing. That’s what I thrive off of,” he said. “When my teammates are happy, I’m happy. When other people are happy, I’m happy. That’s just how I was raised. I’m just a giving person and that’s the way I play.”

Read Next
Austria answers critics with another title for SMB
EDITORS' PICK
‘NCR Plus’ to be under MECQ starting April 12 until April 30 — Palace
Speed up your game with the new vivo Y20s [G]
Pre-order the new vivo Y20s [G] to get a free TWS earphone
Metro Manila to have shortened curfew hours from 8 p.m. to 5 a.m. under MECQ
Malls adjust ‘NCR Plus’ operating hours for April 12-30 MECQ
Pru Life UK receives four golden arrows for solid corporate governance
MOST READ
Stop ‘creeping occupation’ of ‘militia’ boats in WPS, Pacquiao asks China
Bea Alonzo clarifies status of her relationship with Dominic Roque
Convicted former aide of Sen. Bong Revilla dies — BuCor
Locsin to China: ‘Then move out’
Don't miss out on the latest news and information.