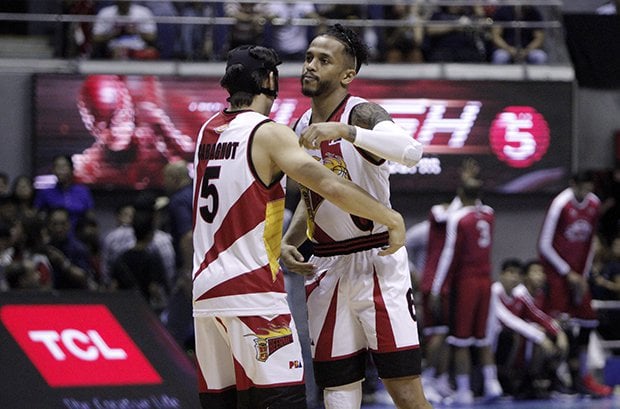 San Miguel Beer’s star backcourt of Alex Cabagnot and Chris Ross suddenly find themselves tied for the top spot in the Best Player of the Conference statistical race through the 2017 PBA Commissioner’s Cup semifinals.

Cabagnot continued his stellar play as he averaged 15.1 points, 6.6 rebounds, 5.1 assists, and 1.2 steals in the semifinals to help the Beermen advance to the championship round.

Ross, the reigning Defensive Player of the Year, meanwhile, normed 13.2 markers, 5.2 boards, as well as racking a league-best 8.1 assists and 2.9 steals.

Defending three-time Most Valuable Player June Mar Fajardo is in third place with 33.067 SPs to complete the San Miguel trio leading the pack for the individual plum.

Meanwhile, Star reinforcement Ricardo Ratliffe continues to top the imports after helping the Hotshots advance to the semifinals.

At distant second is Greg Smith, who gathered 52.909 SPs for Blackwater.