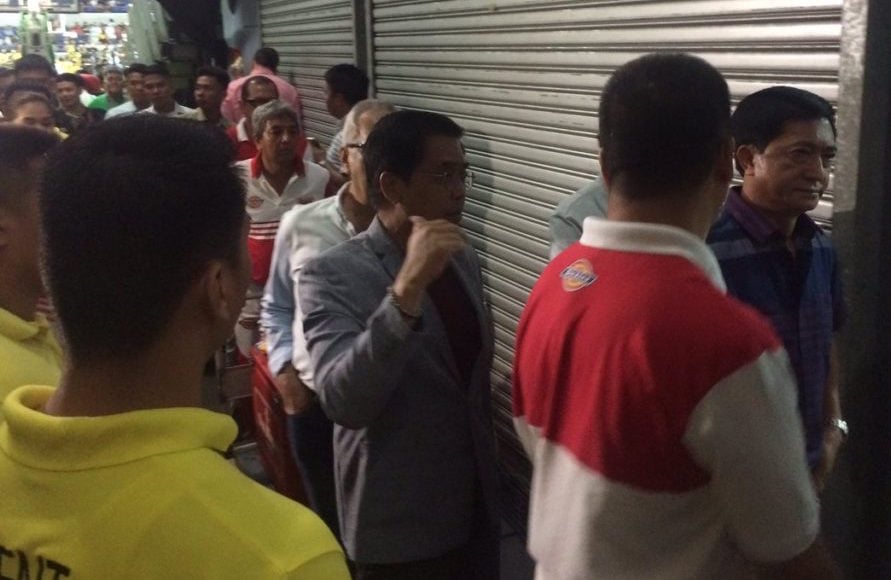 PBA commissioner Chito Narvasa steps in to temper the scuffle between San Miguel and TNT. Photo by Randolph B. Leongson/INQUIRER.net

Emotions got heated three games into the 2017 PBA Commissioner’s Cup Finals as the on-court drama spilled into the Smart Araneta Coliseum tunnel when San Miguel and TNT met on Sunday night.

That led to the two imports being escorted out of the VIP area and into the back of the team’s bench, where they watched the rest of Game 3.

But the commotion didn’t end there, as it continued at halftime when the two teams were on their way to the dugout.

Witnesses said the two TNT imports allegedly pushed the metal gate in the hallway which hit San Miguel governor Robert Non and some of the Beermen staffers, which led to a shouting match between the two sides.

PBA commissioner Chito Narvasa was quick to act on the scuffle. He stepped in between and spoke to officials from both sides.

The reinforcements denied the accusations and that they weren’t the ones who pushed the gate.

“I don’t know what happened with that. I didn’t push no gate. I was just walking over and the gate was just pushed, I had nothing to do with that,” said Myers.

Tensions were tempered in the second half and the Beermen went on to take a 2-1 series lead with a 109-97 victory.

Myers argued that the word war between the two teams meant nothing personal, saying that for his part, he was just willing his team to the victory from the sidelines.

“I just want my team to win. I’m just cheering on my team, going hard for my team. It’s just a competitive game. We’re just talking back and forth. It was nothing serious. No bad blood, that’s all,” he said.

If there’s one thing that worked in Myers’ way though, he said that it just motivates him to play if he gets the call from the TNT management to come in and replace Joshua Smith.

“I’m really excited right now. I want to play so bad,” he said. “I’m very excited. I’m just waiting for my time to come when my time comes I’m ready.”