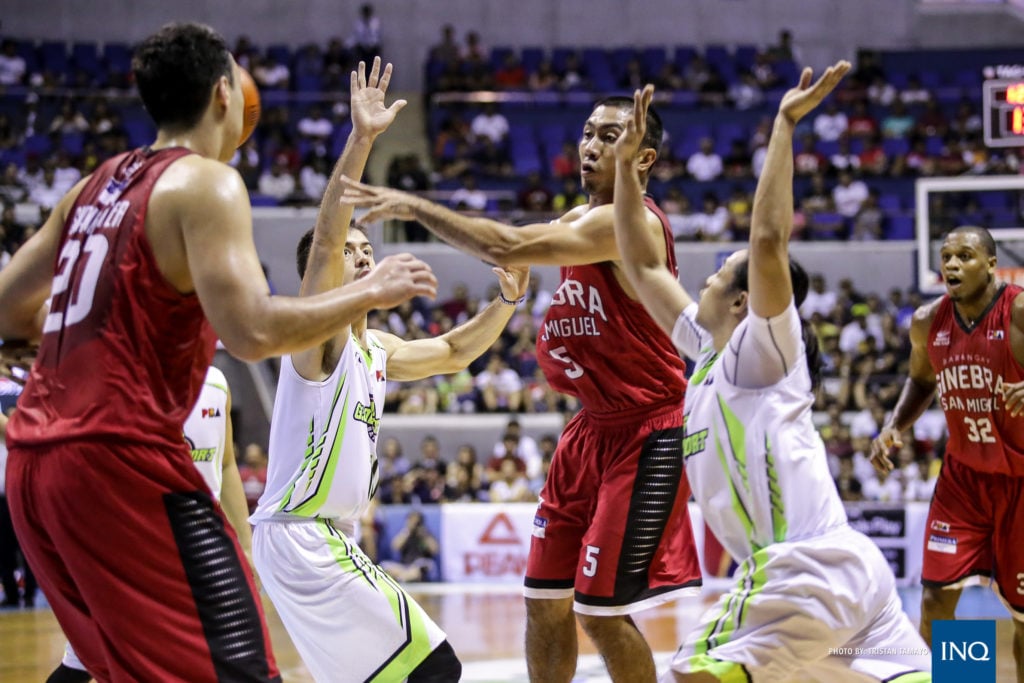 Greg Slaughter imposed his presence down low and helped Ginebra claim its first victory in the 2017 PBA Governors’ Cup with a 124-108 hammering of GlobalPort Sunday at Smart Araneta Coliseum.

Only in his second game since returning from an ACL injury, the Cebuano giant came off the bench and put his foot down in the second quarter, firing 10 of his 19 points to help the Gin Kings jumpstart the blowout and lead by as much as 25, 107-82, with eight minutes remaining in the game.

LA Tenorio got himself going early, unfurling 10 of his 29 markers in the first quarter, on top of five boards and four assists, while Justin Brownlee bounced back from a dismal showing in the Gin Kings’ 93-78 loss to Meralco last week and dropped 21 points, 12 rebounds, and four dimes.

The win came as a shock even to Ginebra coach Tim Cone, who admitted that there was a lot to be desired with how his team fared in its season opener.

“Frankly, I wasn’t sure I’d be here. After our first game, I wasn’t sure if we can figure it out that quickly, but we had a week of practice after that game and we made a lot of adjustments. We visited the triangle a bit more because the triangle is a good post offense,” said Cone.

Read Next
Mallari playing vital role for streaking NLEX
EDITORS' PICK
Sex on the menu for Pogo workers
First female commodore named
Foreigners prepare to flee as China virus toll tops 100
We Can’t Guarantee You’ll Win a P20 Billion Jackpot, But We Can Help You Try
SM continues to send relief assistance to remote towns in Batangas
Best Gift Ideas in the Philippines
MOST READ
Sex on the menu for Pogo workers
‘Normal people doing normal work’ need not wear mask – WHO official
Kobe Bryant gear pulled out of Nike online store in wake of his death
Lacson on VFA impact study: ‘Better late than never’
Don't miss out on the latest news and information.