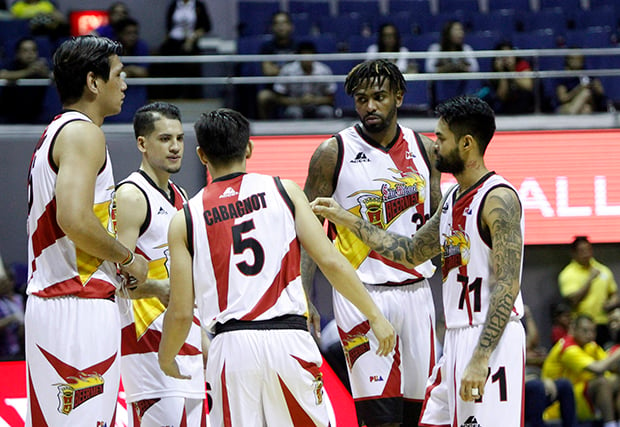 Though more known for its offensive arsenal, San Miguel turned on its defense to wrest top seed, advancing to the 2016 Oppo PBA Commissioner’s Cup semifinals with a hard fought 103-99 Game 2 victory over Star on Wednesday.

“Defense was a big part in that game. We’re playing hard D pretty much the whole game,” said import Tyler Wilkerson. “We needed that win. It’s win-or-go home, and I’m not going home yet.”

For the second straight game, the Beermen had a hard time finding their stroke from threes, shooting 6-of-29 from rainbow country as Star took hold of an 87-78 edge going to the fourth.

But the defense held on, as Chris Ross commandeered the fightback and infused the much needed energy San Miguel needed, keeping the Hotshots scoreless in the final 3:18 of the game.

The sweet-shooting import once again took the spotlight, saving his squad with a 46-point, 17-rebound performance in the elimination game.

However, Wilkerson knows that despite the baskets San Miguel can get, it will always be the team’s defense which will make the biggest difference.

“That’s what we’ve got to do to win the championship and to win the next series, we got to play defense. We can’t really depend on our offense to win. We’re scoring a lot of points but we’re giving up a lot too. We just need to try focusing on our defense and come out victorious,” he said. IDL